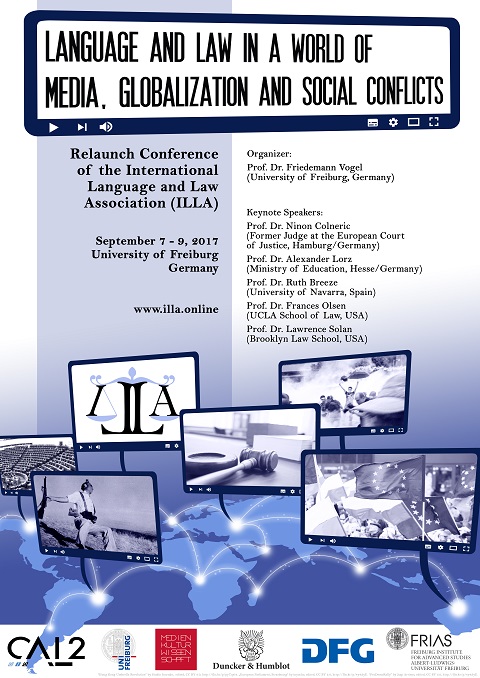 The International Language and Law Association (ILLA) was founded by legal linguists Peter Tiersma, Lawrence Solan and Dieter Stein in 2007. Their initiative was to create a network of linguists and lawyers around the world working on the language matrix of law. In that framework, language is not simply seen as a subject in the legal context or an object of forensic analysis, but as the central medium of modern constitutional states, as the mediator of social conflicts and the core of legal methodology.

After an initial period of gestation, documentated in two conferences, it is now time to relaunch the ILLA, to reconfigure the society on the basis of the experiences up to this point and to give it a new sustainable structure. In memory of Peter Tiersma (1952–2014) we are organizing ILLA’s first international conference of legal linguistics in August 2017, to be held in Freiburg (Germany):

Under this general topic we especially want to discuss the following issues:

(1) The current state of research in the field of legal linguistics in the context of increasing social conflicts in globalized, multilingual and digitalized societies. Here it is also necessary to bring together the particular research traditions of legal linguistics in different countries – for example in Germany, the United States, Russia and China.

(2) Defining the most important tasks for the young discipline of legal linguistics in different cultural, linguistic, and (inter)national contexts. It will not only be beneficial in the legal domain itself, but it will also generate extensive applicational insights at large, by searching for answers to the following questions: How can research results be transferred into the education of future lawyers both in existing programmes and in new international Master’s degree programmes? How can models of legal linguistics be useful for rethinking methodological problems in the context of transnational and multilingual law in a globalized and digitalized world? How can legal linguistics contribute to understanding and resolving social conflicts? And how can we approach legal linguistics as a “theory of practice” (Bourdieu 2009) and as a practice of courts and legislation?

(3) The foundation and restructuring of ILLA, its future guidelines and organisational framework.

The first conference of the International Language and Law Association will be hosted by the University of Freiburg (Germany) under the direction of Prof. Dr. Friedemann Vogel, from September 7th to 9th, 2017.

2019: Legal Linguistics Beyond Borders: Language and Law in a World of Media, Globalisation and Social Conflicts.
Ed. by Friedemann Vogel, Berlin: Duncker & Humblot (Language and Media of Law 2)
» All contributions as open access

Prof. Dr. Friedemann Vogel
University of Freiburg, Germany
E-Mail: This email address is being protected from spambots. You need JavaScript enabled to view it.

This Conference is kindly supported by: